Phill Hopkins is known for the multifaceted nature of his practice, which encompasses drawing, painting, printmaking, photography, sculpture and installation. Working in a wide range of media, from the traditional to the unconventional, Hopkins has created a body of work that, while remarkably diverse, is firmly rooted within a complex and coherent artistic strategy. Recently Hopkins has again returned to the landscape. 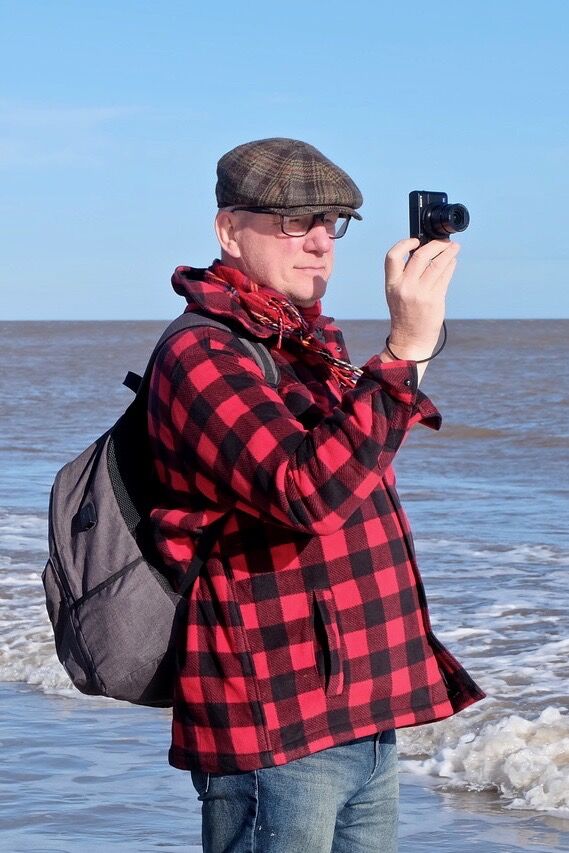 Hopkins was born and raised in in a working class family in Bristol, in the south west of England. He excelled at art at school (he's dyslexic) but did not experience any art outside of the classroom. After working in a warehouse and a bakery he was accepted by Goldsmiths College, London to study sculpture, being taught by Michael Craig-Martin, Carl Plackman, and Richard Wentworth. Whilst at Goldsmiths in 1984 Hopkins was included in the ‘New Contemporaries’ at the ICA, London. After graduating from Goldsmiths in 1985, Hopkins was selected for the ‘Whitworth Young Contemporaries’, Whitworth Art Gallery, Manchester, UK. The same year, he relocated to Leeds, UK.

In the summer of 1985 Hopkins took a studio with Leeds Art Space Society in the East Street studio, a disused warehouse on the banks of the River Aire. In 1987, Hopkins was one of the three prizewinners of the ‘Showcase Summer '87’ at the Elizabethan Gallery, Wakefield, UK. In 1988, St. Paul’s Gallery in Leeds showed ‘The Little Naturalist’; a large installation of his welded steel sculptures. In 1989, Hopkins curated ‘Exchanges’ at the Kunstlerhaus in Dortmund, Germany, which included some of the work from the ‘Little Naturalist’. In 1991, Leeds City Art Gallery staged Hopkins' first major solo exhibition, ‘Flyers - Recent Drawings and Sculpture’. The gallery consequently acquired Hopkins' work for their permanent collection, along with acquisitions by the Henry Moore Centre for the study of Sculpture, the Imperial War Museum, London and many private collections including that of Dr Jeffrey Sherwin. In 1993, at Kettle's Yard, Cambridge, UK, the curator Charles Esche, included Hopkins' sculpture in ‘Declarations of War: Contemporary Art from The Imperial War Museum’. From 1993-1995, Hopkins' work was included in ‘Four Centuries of Sculptors' Drawings from the Collection of Leeds City Art Galleries from Mistodrzitelsky Palace, Moravska Galerie and Bruno, Czechoslovakia. Hopkins was also included in ‘Sculptors' Drawings’ - Cornerhouse, Manchester UK, and ‘Sculptors' Drawings’ at John Hansard Gallery, Southampton, UK. In 2003, to celebrate the 10th anniversary of the Henry Moore Institute in Leeds, Hopkins' work was included in their ‘Other Criteria’ show.

For a period Hopkins concentrated on workshops and educational projects, and then in 2008 Greenbelt Festival presented 'Seven Drunken Nights’, an exhibition of innovative drawings, sculpture and a striking performance piece. In 2012, Hopkins was included in ‘Vollendet - Unvollendet’ at Galerie Pack of Patches, Jena, Germany and has consequently shown with the gallery at Galerie Root, Berlin. In 2013, the artist, Becky Beasley, included a work by Hopkins in her show ‘I fall to Pieces’, which was named after the eponymous title of his piece, at Leeds City Art Gallery.

Since 2012, Hopkins has shown consistently with BasementArtsProject: firstly at 'Supermarket', Stockholm Art Fair, Sweden, and then in 'INHOSPITABLE 1.1' at 64 Wellington Street, Leeds; 'INHOSPITABLE' at Independents Liverpool Biennial; and 'COLONIZE' at 3rd on 3rd Gallery & Dykeman-Young Gallery, Jamestown, New York, USA. In 2015, Hopkins presented ‘Daily’ at BasementArtsProject base in Leeds. This included his 'Daily' newspaper publication as part of ‘About Time’ which was a satellite programme coinciding with British Art Show 8.

In 2015, Hopkins represented the UK in ‘A Beautiful New World’ at the 2nd Nanjing International Art Festival, China. Following this show, 6 of Hopkins' paintings were acquired for the exhibition’s sponsor’s collection. The following year, 108 Fine Art staged a large exhibition of over 100 of Hopkins' drawings, paintings and sculpture at their Harrogate Gallery.

During 2017 Hopkins was included in Expo d'anniversaire 5/5/5 at Galerie Youn, Montreal, Canada and was represented by BasementArtsProject at Sluice Art Fair, London. He continued his association with the curator Si Smith, when he was included in World Turned Upside Down at St Edmunds Church, Leeds, UK. He was included in Land / Line /Sea, when the Australian Cross Gallery took up residence at Artlacuna in London, UK.

In January 2018 he again showed with Cross Gallery, this time in Australia, in 'The London Works'. He showed a series of drawings that he made in the aftermath of The Fukushima Daiichi nuclear disaster in 2011. On 1 February X opened at Left Bank, Leeds UK. A ten year retrospective curated by Si Smith, featuring over 100 works including drawings, paintings, photographs, prints, constructions and collages, that showcases an unravelling of narratives from news stories and the political climate. To accompany X a zine was published which contains two essays on Hopkins; 'Working from Home' by Si Smith and 'Context is King' by Bruce Davies.

Hopkins began 2019 by being included in ‘Carl Plackman and His Circle’ at Pangolin Gallery, London. He exhibited ‘The Giantess and The Tower Block’ alongside artists including, Damien Hirst, Richard Wentworth, Alison Wilding, Phyllida Barlow, Tony Carter, Jonathan Callan, Brian Catling and works by Carl Plackman.
In August the installation 'A House Within A Home', commissioned and shown at BasementArtsProject Leeds, part of Index festival and in association with Yorkshire Sculpture International. This was a major exhibition for Hopkins and contained his biggest sculpture to date, a scaling up of his house motif to a height of 247cm. The exhibition contained sculpture, drawings, photographs, accompanied by two sound pieces. In October Hopkins visited The Rodd, The Sidney Nolan Trust in Wales, where he had private access to Nolan's studio and former home. Using photographs taken on this visit and during the run-up and aftermath of the UK general election in December, Hopkins begun the 'Nolan Country' series as a kind of meditative disturbance and distraction.

2020 began with the completion of 'The Nolan Country' Series consisting of 172 individual works, in 3 groups. In March Hopkins was awarded a visual arts bursary from Leeds Church Institute to work on a six month project with a theologian. In September he was invited to show with the group 'Prosaic' in the group exhibition 'Generous' at Globe Arts Studio, Slaithwaite, Huddersfield UK. On 7 November the exhibition 'House of Questions' was due to open at the Church of the Epiphany, Leeds UK, showcasing the results of the Leeds Church Institute bursary that Hopkins was awarded earlier in the year, but due to the COVID pandemic was postponed until 2021.

In the spring of 2021 Hopkins was included in the '1st Newsprint Open Call Exhibition' at Three Works in the seaside town of Scarborough, North Yorkshire. Two large works were made especially for the show, using pages from the Financial Times, gloss and acrylic paints. In early summer he was invited to show at Cole's Gallery In Leeds in the exhibition 'Everything is Water if You Look Long Enough - A Contemporary Watercolour Show'. After a delay due to the Covid19 pandemic 'House of Questions' opened at the Church of the Epiphany, Leeds UK in July, this was a culmination of the bursary awarded to Hopkins by Leeds Church Institute. During the summer Hopkins was included in the 'Summer Exhibition at Le Passage Gallery on the island of Alderney, part of the Channel Islands UK. Sixteen drawings from the Gibraltar Point series were shown. Goetze Art & Design in Memphis, Tennessee, USA began representation of Hopkins work in the souther states of America. In September the curator Courtney Spencer included works from Hopkins 'Walking Ahead' series in 'Definitions of Drawing' at Sunny Bank Mills, Leeds, UK. To end the year Hopkins was invited to show in two distinct shows; Single Figures curated by artist Sean Williams at the Prosaic Projects Gallery, Bloc Studios, Sheffield UK and Step and Stair to celebrate the Art Space Gallery London 35th anniversary, when the art historian and curator Dr Jon Wood included three drawings by Hopkins, alongside Leon Kossoff, Michael Sandle, Basil Beattie, Deanna Petherbridge, Anthony Eyton, Nick Miller, Carl Plackman, Howard Eaglestone, Derek Hyatt and others. In December Hopkins began work on twenty-five individual canvases for a show with Galeria Fernando Santos in Porto, Portugal later in 2022.